Aristotle on Ways of Knowing 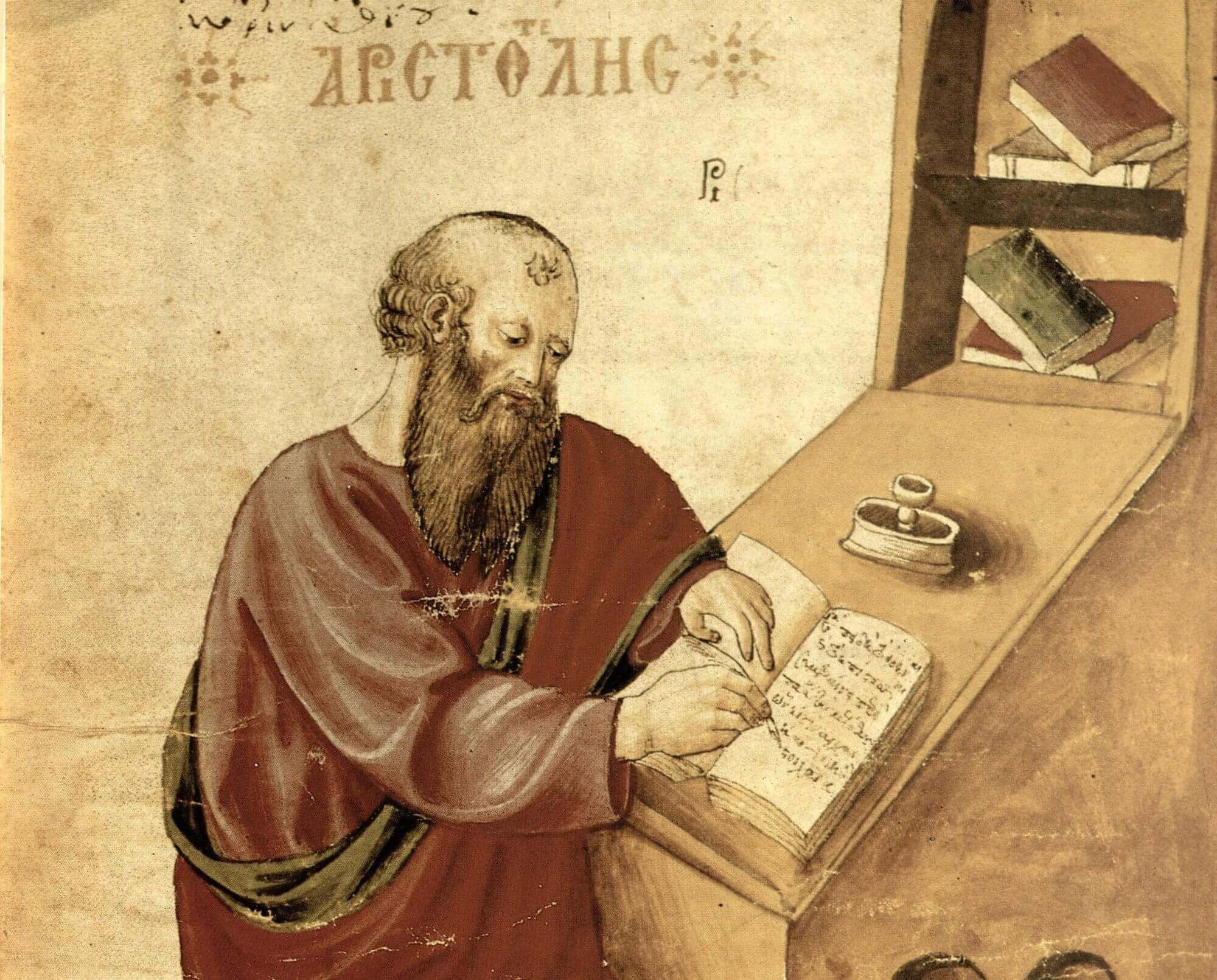 Aristotle is one of the most influential of all philosophers in the Greek tradition. He was Plato’s most famous student, but he ended up rejecting many of Plato’s central ideas, in particular his theory of forms. And he was a formative influence not only on the philosophical traditions of Europe but also on those of the Islamic world.

However, if the ancient biographer Diogenes Laërtius is to be believed (which, alas, he isn’t always), Aristotle was quite a curious individual. He had skinny calves and small eyes. He dressed in fancy clothes, wore his hair short—not a fashion at the time—and had a fondness for elaborate rings. When he spoke, he spoke with a lisp. And although we are used to seeing images of Aristotle with a full beard, it is said he preferred to be cleanly shaven. He was, in short, an oddball.

This picture of Aristotle as an oddball may have something to do with the fact that he was always an outsider in Athens, and never became an Athenian citizen.

Aristotle was born in Stagira in Northern Greece in 384 BCE. His father was well-connected, possibly a doctor to the king of Macedon. His mother, too, seems to have been independently wealthy.

Some later philosophers (Epicurus is one) suggest that while Aristotle was still young, he squandered part of his father’s fortune, then fled home to join the army. But, the stories go, he turned out to be a hopeless soldier, so he was thrown out of the army. After that, he made a living peddling dubious drugs, drawing on the knowledge of medicine that he had gleaned from his father.

Well, maybe. Or maybe not. It was common in the ancient world for philosophers to launch ad hominem attacks on their philosophical rivals. Other accounts of Aristotle talk of him very differently: as someone who was generous-spirited, humble and exemplary in his behaviour.

Either way, what we do know with more certainty is that eventually—probably while still in his teens—Aristotle wound up in Athens, where he became a part of Plato’s circle.

Aristotle studied with Plato for the best part of two decades. But when Plato died in the year 347, Aristotle left Athens for the city of Assos, in present-day Turkey. There, he stayed with his friend Hermeias, another of Plato’s former students who had risen to become the tin-pot ruler of Assos. In Assos, Aristotle continued to study philosophy, but after the death of Hermeias, he moved again, this time across the water to Lesbos.

Then in 343 BCE, Philip, the king of Macedon, summoned Aristotle to the capital city of Macedonia. There, Aristotle became a tutor to the king’s son, Alexander—later Alexander the Great. 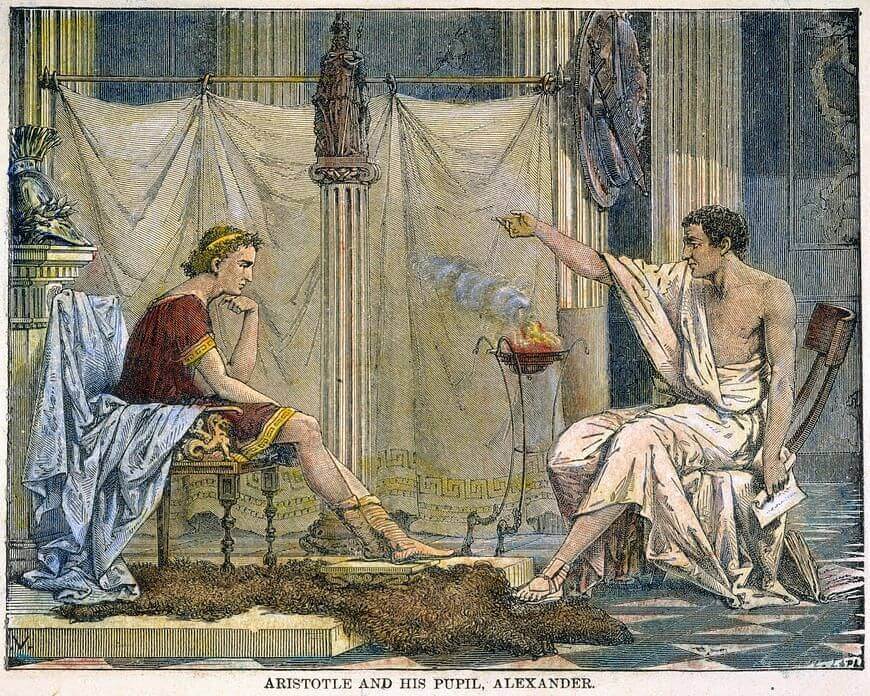 Aristotle taught Alexander for a couple of years, after which he kicked around Macedonia, developing his extensive work in natural history. But by 335 BCE, he was back in Athens where he set up his own philosophical circle, the Lyceum (named after the god Apollo Lykeios). He stayed for thirteen years.

The Lyceum functioned more or less like a research community. Aristotle and his students set about gathering together the world’s knowledge. The Lyceum was a place where people studied ethics and politics, history and medicine, the arts and biology. This breadth is reflected in the extraordinary range of Aristotle’s philosophical work.

In 323 BCE. Alexander, Aristotle’s former pupil and now the ruler of Macedon, died. With anti-Macedonian feeling high in Athens, Aristotle left the city for the island of Euboea. He died there the following year.

Aristotle writes about pretty much everything. This inevitably makes him a somewhat daunting philosopher to read. Diogenes Laërtius says that he wrote one hundred and fifty volumes, many made up of multiple books. Not all of these books are still extant. But what remains is still breathtaking in its depth and its breadth.

In the *Poetics—*a book that is almost a Bible for some Hollywood screenwriters—Aristotle talks about storytelling and how it works.

In the Nicomachean Ethics, he talks about what it means to live a flourishing life, and how virtue is a central part of this flourishing.

In On the Soul, he asks profound questions about what makes us the unique individuals that we are.

In On Divination in Sleep, he talks about prophetic dreams.

In the *Movement of Animals—*one of his many treatises on biology—he explores (unsurprisingly, given the title) how animals move.

And in the Politics, he talks about the practical business of how we exist, and how we can thrive, in social groups.

Aristotle’s work is so vast and extensive that, at first glance, it seems as if his interests are all over the place. How do you even think about subjects this diverse?

But one of Aristotle’s most significant contributions was the insight that there are different ways of knowing appropriate to different domains. This allows him to structure and divide up human ways of knowing, to bring some order into this seeming chaos.

Theoretical knowledge has an element of standing back from the world and contemplating. The Greek word theoria is derived from the word theōros, which means a spectator—like a spectator in a theatre play. So this kind of knowledge includes things like knowledge of mathematics, physics, and metaphysics (those big questions like “what is time?”, “what is causation?” and so on).

But we are not just observers of the world. We are also beings who act, both individually and collectively, to bring about certain social or individual ends that we consider to be good. This is where practical knowledge comes in: the knowledge that involves questions about how we act in the world, whether individually (ethics) or in collectives (politics and economics).

Finally, we don’t just think and do things. We also make things. We bring new things into being. This is productive knowledge: the kind of knowledge we need to throw pots, write plays, cook dinner, knit sweaters, paint pictures, or make chairs out of wood.

Getting Philosophical About Cake 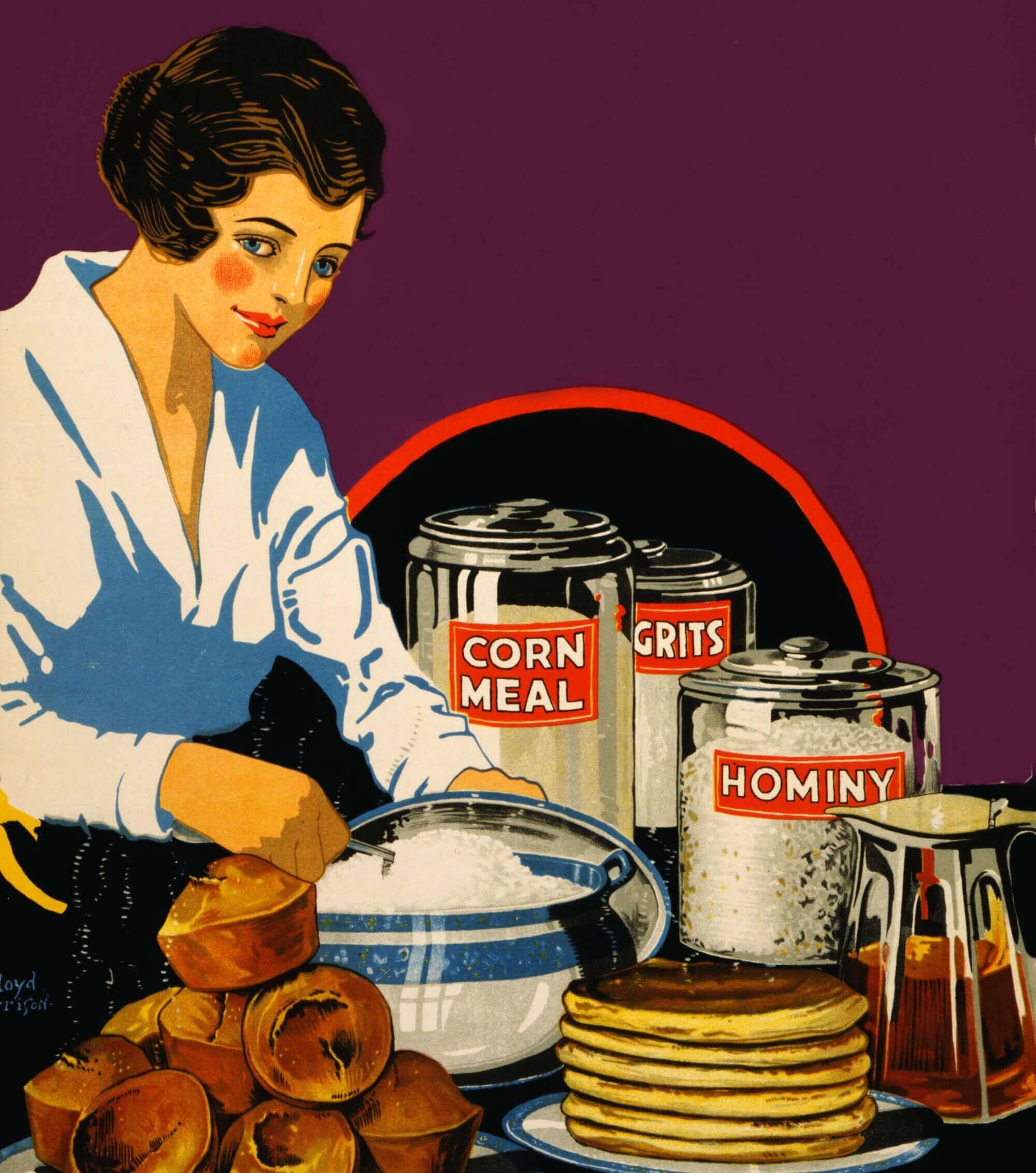 Let’s take an example of these different kinds of knowledge in action. Imagine you have three philosopher friends, all of whom have an interest in cake.

One friend excels in their knowledge of chemistry. They can tell you exactly what is going on when you mix cake ingredients and put them in the oven. But they can’t bake to save their lives. Friend number one excels in theoretical knowledge.

Another of your friends is skilled at arbitrating in tricky social disputes such as the question “Who should get the last slice of cake?” Friend number two knows just how to handle complex social and ethical situations. This is practical knowledge.

Finally, imagine you have a third friend who is a superb baker. They flunked chemistry at school, and they’re not really particularly bothered by who gets to eat the cakes they make. But they have a profound understanding of the craft of combining ingredients to conjure perfect confections. This third kind of knowledge is productive knowledge.

Human ways of knowing are not single but multiple.

There are a lot of good introductory books on Aristotle. Try Jonathan Barnes’s Aristotle: A Very Short Introduction (OUP 2000). Christopher Shields’s Aristotle (Routledge 2007) is a very thorough and accessible introduction.

Edith Hall’s Aristotle’s Way (Penguin Random House 2015) mines Aristotle’s work for advice on how to live. It’s worth a read.

The entertainingly scurrilous versions of Aristotle’s history, as well as a good weighing of the evidence, can be found in Carlo Natali’s Aristotle: His Life and School (Princeton University Press 2013).

To go a little bit deeper, read my piece on navigating wisdom with Aristotle.