Living the Life of a Dog with Diogenes the Cynic 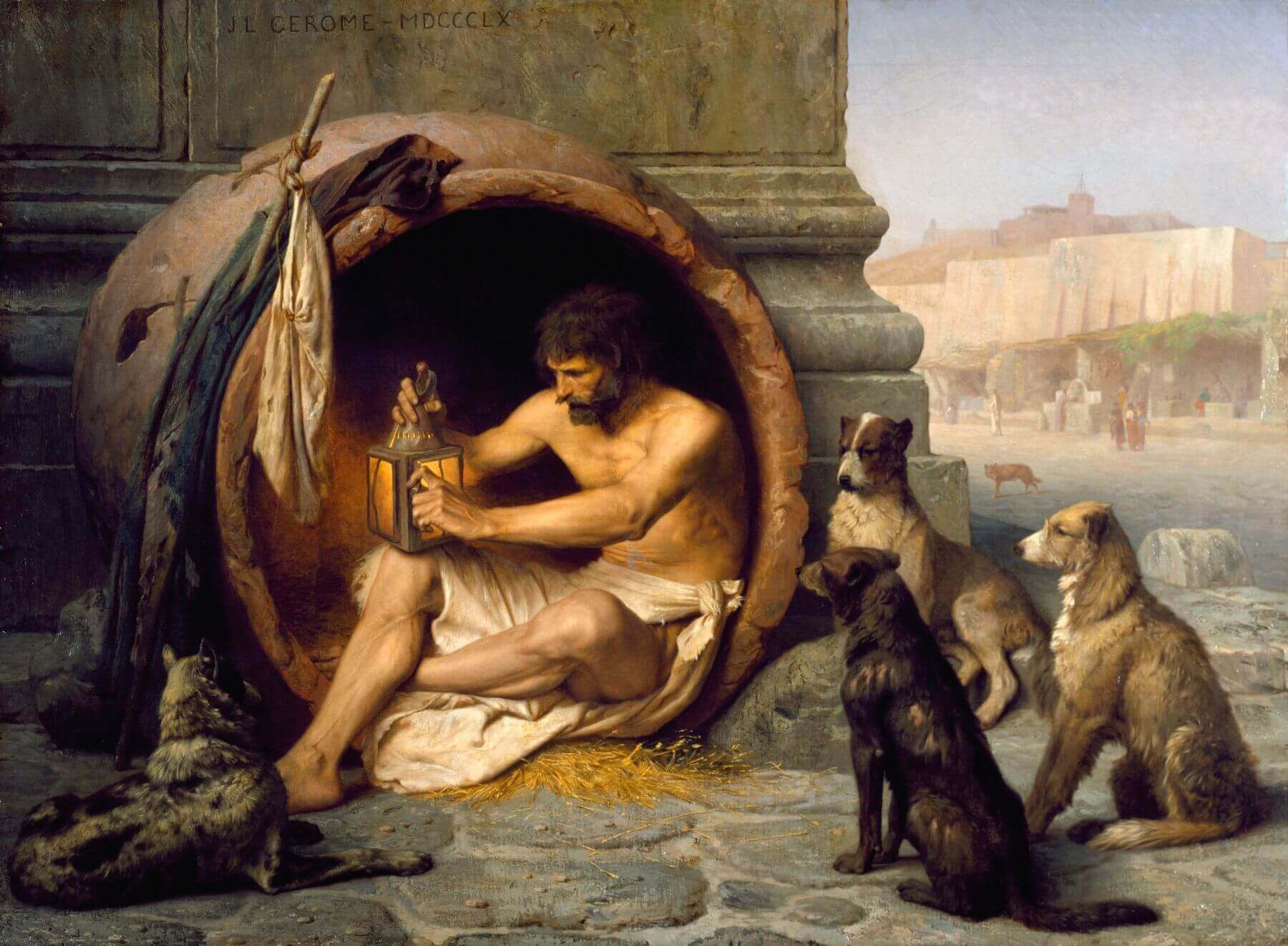 Diogenes — also known as the Dog — was a native of the state of Sinope on the Black Sea coast. He was born around 410 BCE, by which time Sinope was a busy commercial hub, standing at the end of a trade route that stretched all the way to Mesopotamia.

According to early accounts of Diogenes’s life, his father Hicesias was in charge of managing the Sinope mint. But there was a scandal about counterfeit, defaced or adulterated coinage, which led to Diogenes fleeing into exile in Athens.

The exact details of the scandal differ depending on whose account you read, and it’s not clear what went so wrong at the Sinope mint. But the textual records are supported by archaeological evidence of defaced coins bearing the name of Hicesias, giving more weight to the story.

Some accounts say that after fleeing Sinope, Diogenes went to consult the Delphic oracle who told him to keep on defacing the currency. Diogenes understood this as a call to overturn the everyday currency of customs and moral norms that underpinned Greek society.

When he moved to Athens, Diogenes became a student of Antisthenes, the ascetically minded follower of Socrates. And he resolved to live unconventionally. He became homeless by choice, and he took up residence in a large earthenware storage jar in the street. For the following few years, Diogenes lived, ate and even publicly masturbated in his street-dwelling. When the citizens of Athens complained about impropriety, Diogenes apparently retorted, “If only rubbing the stomach could alleviate hunger pains as easily.”

It is this behaviour that gained Diogenes the nickname “the Dog” or kynikos.__ Antisthenes had also been known by this insult (or by the even better-sounding “downright dog”). But although these terms were meant as insults, Diogenes took the name to heart. Once, when asked why he was called “the Dog”, Diogenes calmly replied that:

I fawn on the people who give me something, bark at those who don’t, and sink my teeth into scoundrels.Diogenes the Cynic: Sayings and Anecdotes_, p. 43._

It is from this nickname that the philosophical tradition started by Diogenes took its name: in Greek, kynikos means “dog-like.” As far as the Cynic followers of Diogenes were concerned, there was much that was admirable and worthy of emulation in the lives of dogs because dogs live naturally, without the encumbrances of culture and conventional morality.

At some point, Diogenes the dog became a sea-dog, and he took a voyage to Aegina. It was on this voyage that — if the later accounts are to be believed — he was captured by pirates and sold into slavery. His cockiness on the auction-block attracted the attention of a man from Corinth called Xeniades.

Diogenes travelled back to Corinth to manage Xeniades’s estate, and to tutor his two sons. In Corinth Diogenes is said to have met with Alexander the Great, who famously told Diogenes he would offer the philosopher anything he wanted. Diogenes replied that he wanted Alexander to get out of his way because he was blocking the sunlight.

Accounts of Diogenes’s death differ. According to some stories, he died after being bitten by a dog. Other accounts have him suffocating himself by holding his breath and abstaining from breathing. Still other accounts say he snacked publicly on raw octopus, to demonstrate to an admiring crowd how cooking was a waste of time, and he subsequently died of food poisoning.

The Cynics were the beatniks of the ancient world. They dropped out of the rat-race, preferring to emphasise self-sufficiency or autarkeia. You could recognise a Cynic philosopher by their itinerancy and their fewness of possessions. All you needed if you wanted to be a Cynic was a cloak to keep the weather off you, a backpack to carry a small amount of food or nourishment, and a sturdy staff to help with walking and warding off danger.

This itinerant self-sufficiency was backed up by a philosophical critique of the society of which the Cynics were a part. For Diogenes and his later followers, conventional ways of life were profoundly wrong-headed. The pursuit of wealth and status made people hostages to fortune. And the very notion of value was confused and incoherent. Diogenes pointed out that you could get a day’s supply of barley-flour — enough to sustain you — for a couple of coppers, but a statue would cost three thousand drachmas. Where, he asked, was the logic in that?

This incoherence was why for Diogenes there was an urgent need to remint the moral currency of everyday life. Culture was broken: not just the culture in which Diogenes found himself, but all culture. And true wealth was to be found in turning one’s back on culture, embracing self-sufficiency and returning to nature.

It is thus necessary that, instead of engaging in useless exertions, we should choose those that are in accordance with nature if we are to live a happy life; but through their foolishness, people are unhappy.From Diogenes the Cynic: Sayings and Anecdotes_, p. 46_

One contemporary idea that can be traced back to Diogenes is the idea of cosmopolitanism. In Greek, the word kosmopolitēs means someone whose polis or city-state is the kosmos, or the universe as a whole.

For Diogenes, the idea of cosmopolitanism signalled freedom from dependence upon any particular set of cultural or political circumstances. Dogs, after all, feel at home in multiple places. They do not alienate themselves by getting tangled up in political debates, or speculations about the nature of the gods, or an obsession with creating great art, or any of the other peculiar things that human beings do. Instead, they attend to their basic needs, and to what they need to feel at home, wherever they are.

Diogenes’s cosmopolitanism was also a kind of insouciance in the face of good and ill fortune. When we revert to our most basic bodily needs, we find ourselves invulnerable to changes in fortune.

When someone asked him what he had gained from philosophy, he said, “This, if nothing else, that I’m prepared for every fortune.”From Diogenes the Cynic: Sayings and Anecdotes, p. 35

If you can cultivate this art of living, Diogenes argues, you can be at home wherever you find yourself: whether you are in Sinope, or driven into exile, or in a jar in the marketplace, or captured by pirates, or gnawing on raw octopus for an admiring crowd in Corinth.

There are several collections of texts about Diogenes. Try, for example, Diogenes the Cynic: Sayings and Anecdotes, With Other Popular Moralists, translated by Robin Hard (Oxford University Press 2012). This is the one I’ve used for the translations here. Another good one is the Penguin Classics edition, The Cynic Philosophers: From Diogenes to Julian, translated by Robert Dobbin (Penguin 2012).

There are also some good books out there on the Cynics as a philosophical school. William Desmond’s Cynics (Acumen 2008) is particularly accessible.

There’s a TED-Ed video from William Desmond on Cynicism. It’s fun and well-informed.

Learn how to be a Cynic with Philosophy Now.