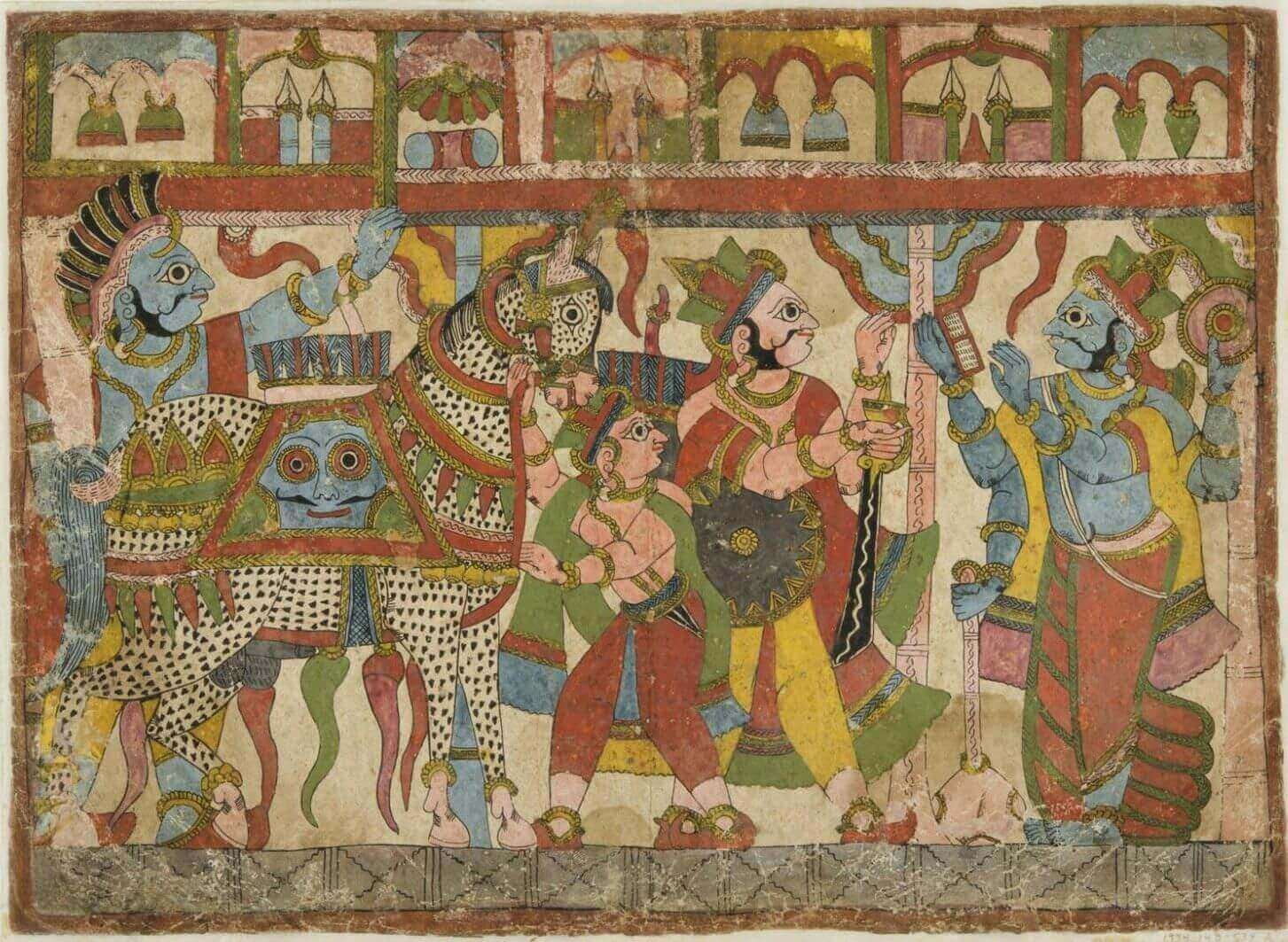 Killed by an elephant

The philosopher Jaimini is an obscure figure. We know almost nothing about him, other than the story – which may or may not be true – that he was killed by a rampaging elephant. But beyond this, the records are silent.

Although he is known as the founder of the mīmāṃsā philosophical school, we don’t even know which century Jaimini lived in. The best guest for a date for the Mīmāṃsā-Sūtra, the foundational text of the mīmāṃsā philosophical tradition attributed to Jaimini, is sometime around 200 BCE, although some scholars date it to a couple of centuries earlier.

Mīmāṃsā philosophy is not particularly well-known outside specialist circles of scholars of Indian philosophy and religion. Nevertheless, it was a long-lived and remarkably broad tradition, spanning around two thousand years. And it is a tradition that still raises intriguing questions about ritual, and about religious language.

The sustaining power of ritual

The problem the mīmāṃsā philosophers faced was how to account for and justify the practices of ritual as set out in the ancient Vedic texts. The term mīmāṃsā literally means something like “the desire for knowledge”, “inquiry” or “reflection.” And what the philosophers of this tradition were dedicated to reflecting upon or inquiring into were the ritual demands set out in the ancient Vedic texts.

The Vedas were traditionally divided into those parts that were concerned with knowledge (the jñāna-kāṇḍa) and those parts that were concerned with ritual action (karma-kāṇḍa). This division reflected a twofold division in the religious and philosophical cultures of India. On the one hand, there was a long tradition of philosophical speculation dating back to the Upaniṣads. On the other hand, there were the texts that set out, in painstaking detail, the practical religious rituals that were considered to order and sustain the universe.

The first of these may seem to naturally lend itself more easily to philosophical reflection. But the mīmāṃsā philosophers were committed to thinking through the second set of texts. They wanted to put philosophical flesh on the bones of these religious rituals, making sense of them and justifying them.

In the Vedas, ritual is seen as having a sustaining and ordering power. For the ancient Indian brahmins or ritual specialists, the proper performance of ritual was considered to sustain the cosmic ordering of the universe or dharma. The idea that ritual has a sustaining role is one that is not unique to India, but is also found elsewhere, both in Chinese Confucian philosophy and in the philosophical traditions of Mesoamerica. And perhaps this idea is not entirely unfamiliar today. Everyday rituals underpin all social groups, from family units to workplaces to entire nations.

But for the ritualists of ancient India, ritual’s sustaining power was more than just social. It didn’t only uphold and maintain the social fabric, but instead, it was considered to be a means of sustaining the universe as a whole.

The challenge of arbitrariness

And this is where mīmāṃsā scholars hit a problem. The problem was that of ritual’s seemingly wilful weirdness, its curious combination of apparent importance, and apparent arbitrariness. Religious ritual, after all, is often marked by being something other than everyday practice or behaviour. It is performatively strange, set apart from the everyday.

And this performative strangeness means that rituals are always open to the destabilising question of why things are done as they are. Why prostrate full-length before a shrine? Why abstain from meat, or from food altogether, during this particular time-period? Why wear such absurd hats? Why stand solemnly, hands folded, for the national anthem? Why not crouch, or leap in the air joyfully, or wave your arms around, or yodel in tune, or take off all your clothes to demonstrate the naked force of your commitment to the nation? Aren’t all the odd forms of ritual behaviour in which human beings indulge somehow arbitrary? 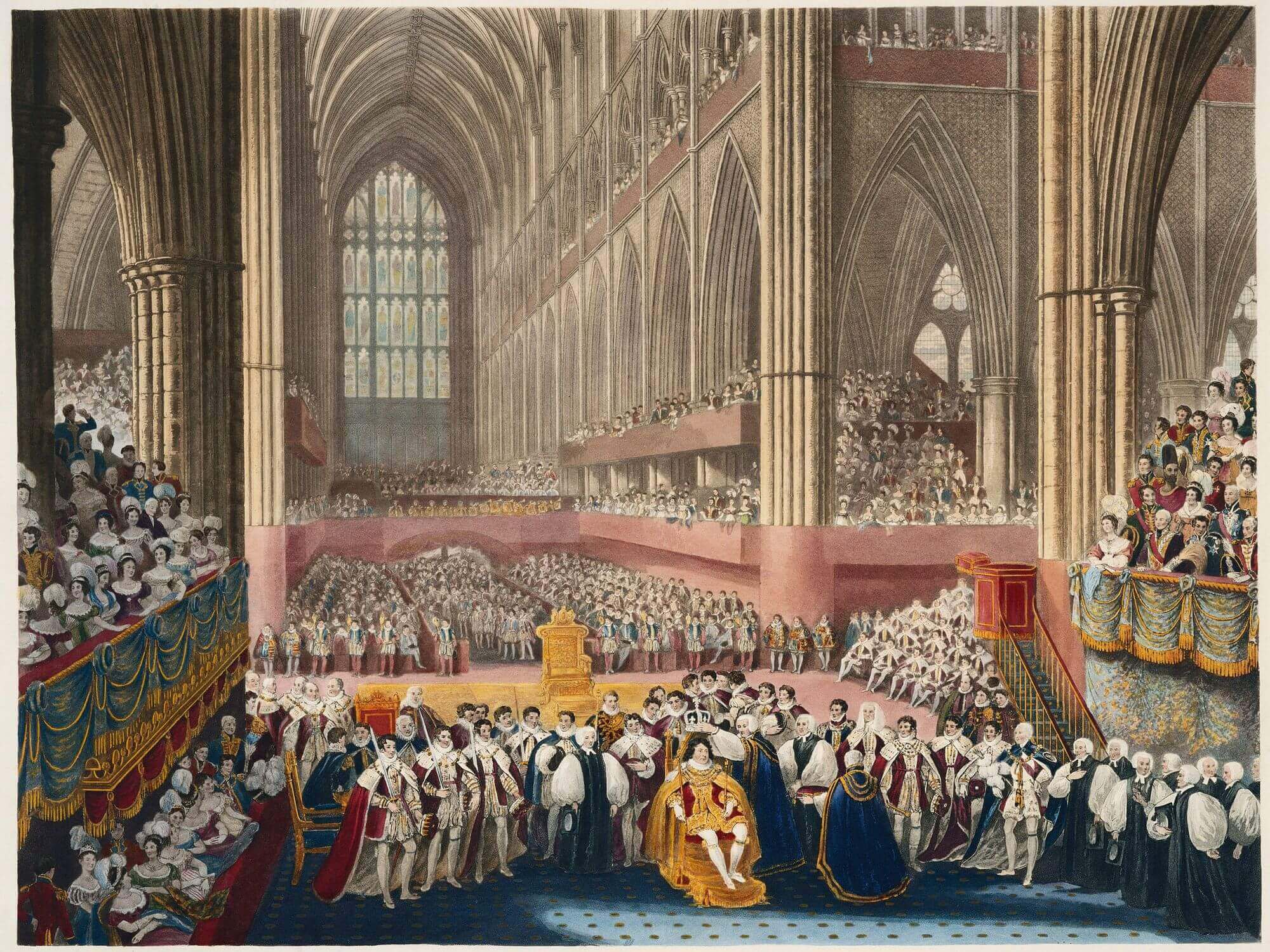 Why sing national anthems? Why not yodel? Why not crouch or leap? Image: The Coronation of George IV (1821). Public Domain via Wikimedia Commons.

So when you start to ask the question of “why?” things are done as they are, the seeming arbitrariness of ritual becomes a problem. This question “why?” undermines ritual’s seriousness, and risks leading us to the conclusion that ritual is just a lot of fuss about nothing.

So, this is one way of understanding the task of Jaimini’s Mīmāṃsā-Sūtra: to defend Vedic ritual practice against this charge of arbitrariness, and along the way to demonstrate how this ritual practice can be taken to be authoritative.

To do this, the Mīmāṃsā-Sūtra takes an interesting line of argument. It begins by asking what religious language is for. For Jaimini, what is central to the religious language (in the karma-kāṇḍa at least) is that it tells us what to do. Religious texts, for Jaimini, do not function by saying “this is the case.” Nor do they aim to give us information about how things are, bulletins from the divine. Instead, they simply tell us how to act. They tell us what we should and should not do and set out our duties. Religious language, Jaimini argues, is about injunctions (vidhi in Sanskrit).

But what makes an injunction? For Jaimini, there’s no point in an injunction that tells us to do what we would do anyway. “Have a cup of coffee, put your feet up, and watch TV” would not serve as a religious injunction, because this is something that we might choose to do anyway. There’s absolutely no force to an injunction such as this.

Nor do religious injunctions encode teachings that are useful to us for external reasons, or from which we might derive some non-religious benefit. For example, “eat three square meals a day (because it is good for your health)” would not have the force of a religious injunction.

And, finally, Jaimini tells us, religious injunctions cannot enjoin us to do something we simply can’t do. “Pray all day until you sprout wings, and then ascend to the heavens like a bird,” is not a good candidate for a religious injunction, because you can pray all you like, but you will remain wingless.

“Sprout wings and fly” is a poor candidate for a religious injunction, because such injunctions should be possible. Lithograph, 19th century. Wellcome Collection via Wikimedia Commons.

This means that for Jaimini, religious injunctions should be possible. They should be things that we can do (even if they are demanding). But they should also be outside of those things that we might otherwise do for non-religious reasons, even for good moral reasons. In other words, they should be genuinely novel.[2] The oddness of ritual might seem like a bug. But it turns out to be a feature, perhaps the defining feature, of what marks something out as ritual.

However, this leads Jaimini to a curious place, because this implies that religious injunctions do not have a moral or even a practical force. We perform these things not because they are good or right, but because we are enjoined to perform them. And here, it might look as if Jaimini is doing the opposite of justifying ritual. Having given up on making an appeal to usefulness, or to external moral criteria, as a way of justifying any particular system of religious commands, isn’t he instead justifying the arbitrariness of ritual?

But Jaimini recognises that this seeming arbitrariness is not the fatal flaw of religious injunctions and rituals. Instead, it is the source of their power. Jaimini follows this line of thought to push towards an astonishingly bold conclusion. He claims that the Vedas are not justified by anything outside themselves. They are absolutely self-sufficient. The Vedas rest on nothing, because everything rests on the Vedas. They are unauthored and eternal, without any need for external justification. For the mīmāṃsā philosophers, one could say, “in the beginning was the text.” And it is because the Vedas do not rest on any external conditions, because they have no justification beyond themselves, then they can be taken as having supreme authority.

The power of ritual

This raises some intriguing questions about religious language and about the role of ritual in human life. Because even if we don’t follow Jaimini to his conclusions about the Vedic texts, perhaps it is possible to see some deeper truths here. For example, the idea that religious injunctions take their power from their strangeness and novelty, their distance from practical concerns. Or the idea that the seeming arbitrariness of religious and ritual injunctions is the key to their strange, compelling power.

One of the best summaries of Jaimini on ritual is in Peter Adamson and Jonardon Ganeri’s Classical Indian Philosophy (Oxford University Press 2020). Elisa Fresci’s ‘Alternative Theisms’ is also well worth reading. See the link here.